I flew down to Jacksonville FL yesterday to visit my Mom. It was good and convenient to fly commercial down there for the day. Of course I get upgraded to first class since I travel for work so much. I overslept this morning and missed church. After I buy a plane it will take me 2.5 hours. On this commercial flight, after security and getting to the airports (both ends), taxi time, walking to the ground transportation was about 4 hours, even though it was only 45 minutes in the air. I am not saying that general aviation is more efficient. You start thinking like that and you have forgotten about risks. Do what you do to be safe. Stay home, don't get in the shower. Think.

I am studying aviation communications. It is definitely my weakest spot. Back when I was flying around Greene NY the radio wasn't nearly as important as here in the Atlanta area. It is a matter of confidence in the new domain. I hold the highest level Amateur Radio license from the FCC (Amateur Extra), I have a Distinguished Toastmasters Achievement from Toastmasters International (DTM), I worked in Antarctica as a Senior Comms Tech out in the field. You would think it would come easy. I have been through learning curves before. It seems different. People who know me know... I will get on the other side again, no matter what it is.

The following pic is of a DeHaviland Comet, the world's first successful commercial jet aircraft. It predates the Boeing 707. I always thought the engine inside the wing approach made sense. This was the aircraft that taught the world about aluminum metal fatigue. 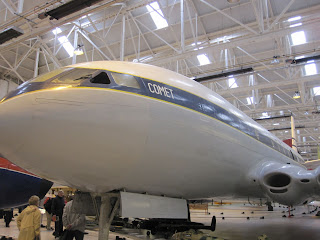 DJ and I climbed Stone Mountain today. Stone Mountain is an "impordent" part of Atlanta life. In any culture high places often have spiritual significance. No different in the modern-day growth-region of Central/Northern Georgia. It is an interesting walk. Stone mountain is a largely monolithic mass of granite. I had become familiar with the obvious out-crop just like the skyline of downtown Atlanta. I see it from the cockpit of my C-172 as well as the very-top overpass of "Spaghetti Junction". The walk gets steeper as you get nearer to the top. My altimeter watch indicated that we scaled a 70 story building, albeit in nature. I saw no one turn back. That also seems to be part of the culture. People as everywhere around here are openly conversive with strangers. It is a regular walk for exercisers and urbanites that need to do something different. It is close to Duluth and Atlanta. It took about 30 minutes by car to get there from Duluth. We spent about 2 hours on the mountain. 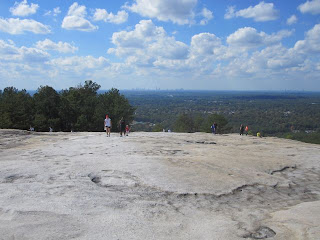 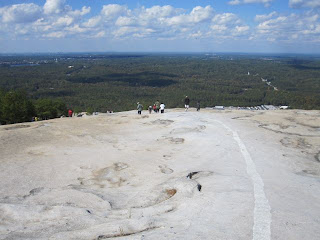 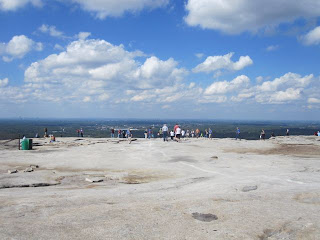 OK. Scenario: You are doing regular stuff. You know, shopping and what-not. You get in the car, reach in your pocket to get going at the plaza after a store-stop and realize the car key has broken in your pocket. What would you do? I will tell you what I did in a future post. I can tell you that the event was barely noticeable in any delays or errand stops and subsequent efforts.

DJ is in Atlanta for a week. Life is good. I am planning trips to the Netherlands, Denmark, Germany, Brazil, Argentina and Kansas. Work is going great. It feels good to be effective and part of a winning executive team. My bosses are great.

I am getting a bit more urban. Although I am looking forward to spending some time back on the farm. I picked up DJ at the airport using mass transit. The MARTA Train is obvious and good. ATL is huge, but when you step back, very special. The fall weather here in Duluth is fantastic. 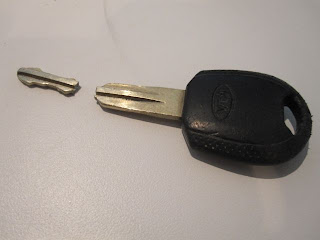 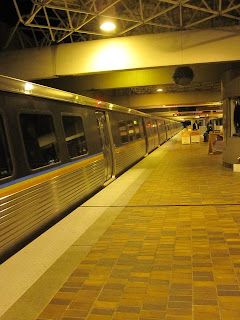 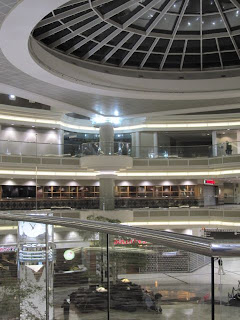 It took about 28 hours to get back from central Finland. I got to my apartment about Midnight (7 am Finland Time). I am a bit tired today. I did work out this morning. There hasn't been much of an opportunity lately being in Europe for the last two weeks. I went out to the airport to study using the instruction DVDs for the glass cockpit aircraft. Of course there was lots going on. I took a tour of "Aluminum Overcast" the B-17. I also got a ride in a Robinson R44 Helicopter. A nap is next on my agenda. 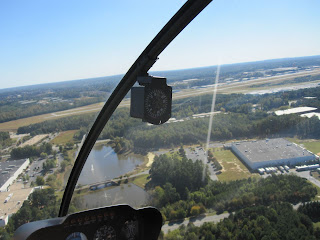 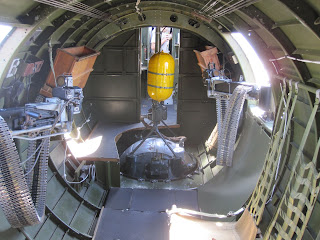 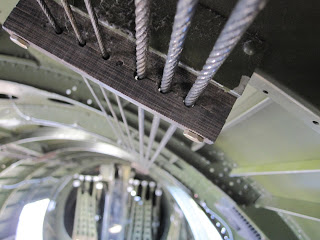 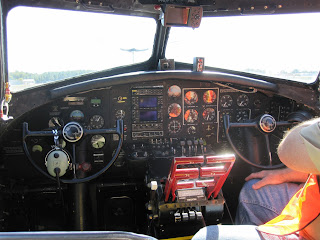 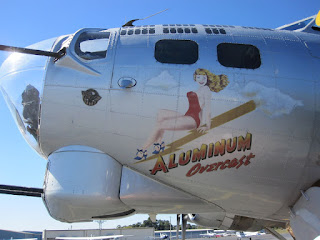 In the following picture you will see a very interesting phenomena. The plane is above the clouds with the sun behind. You can see a shadow of the plane, but the more significant thing is the perihelia around the shadow. It was the day for that image. I had several opportunities for pics and I took a little film as well. You can see two distinct rings in the pic. The plane has a relatively sharp edge and the diffraction caused by the plane produces a nice series of rainbows projected on the clouds, I think. Very nice. 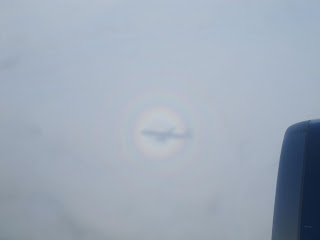 In about 10 hours I am headed back to Duluth. I had a great meal last night of Rain deer and Blue cheese ice cream. It is absolutely true.

That makes 36 significant destinations in 12 days or 3 cities per day. The shortest travel time between any of these was about 20 minutes by car, the longest about 8 hours in the air. There were a whole lot of meetings and discussions.

Finland is nice. It is getting dark here about 5:30 pm. In the middle of winter they get about 4 hours of daylight in Jyvaskyla. 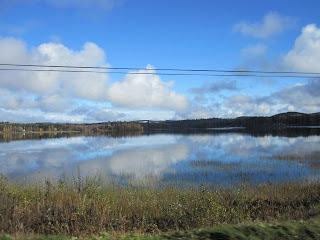 Work is starting to ramp down here in Finland. I have a couple more meetings tomorrow then Friday morning I am headed back to the US. I am tired. I am smarter. I have been influential.

It was snowing in Finland. It made me very homesick. The thing that looks like a bear is actually a very high-tech bear anger-management simulator. These days there are simulators for everything. The high-tech folks in Finland who have brought us saunas, cellular phones, and countless other modern devices have also brought us the use of these simulators. Next time I get to try the techniques on a real bear.

The other pic is something I hope you think is off the beaten path. These World Dryer people aren't kidding. 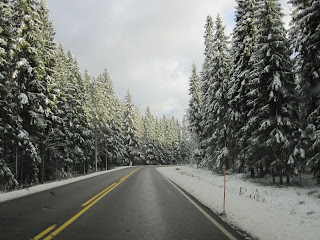 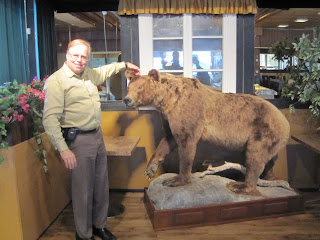 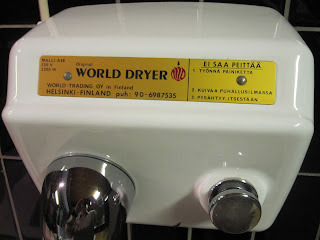 "Any fool can make things bigger, more complex and more violent. It takes a touch of genius - and a lot of courage - to move in the opposite direction."

I am back in Finland. I have a 3 hour or so layover in Helsinki before I get to my final destination this evening. It will be about 1:00 in the morning when I get there. Tomorrow morning I drive for a couple of hours. The plane tonight carries freight as well as humans. It takes a while to get to the inside of Finland even from the UK. I will be in Finland 4 and 1/4 days. I have two cities to get to and participate in many meetings.

Driving in England was a great experience. learning to drive on the left hand side is much easier than learning to fly an airplane.

I anticipated and got some great shots from Birmingham (BHX) to Paris (CDG) today over the English Channel. The pics are from Seat 01A on an Air France AVRO RJ85 jet. These things have so many engines for such a small plane. I suspect they shut two down during cruise, 'cause the plane makes some pretty weird engine noises after takeoff and while on approach. 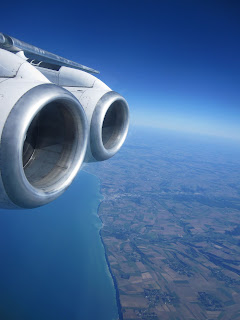 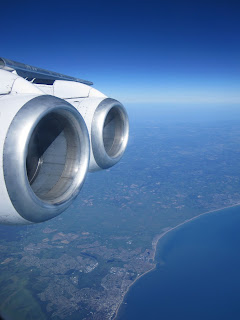 Today I managed to fit in a dealer visit. My guide was great. Not only is he a pilot he was also an Antarctican. He was involved for years with the British Antarctica survey at Rothera Station. We had some great discussion. It has been a week of Antarctica in Europe. My workload is very high, but there are worthwhile tidbits.

I am adjusting to driving in England. Every mile breeds competence and confidence. 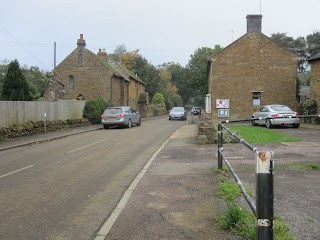 I think I may be growing new taste buds here in France. The food has been great of course.

I also had another treat. The Massey Ferguson Museum at the plant has the original lead tractor "Sue" that Sir Edmond Hillary used on his drive to the South Pole. I had seen pictures and had read about it. It was totally unexpected to see it there. It was good. I met one of the original members of the team that made that famous third traverse to the pole when I was on the ice. It must have been a good tractor. http://www.fofh.co.uk/articles/pole.htm

Tonight I am in England where the tractor was made. 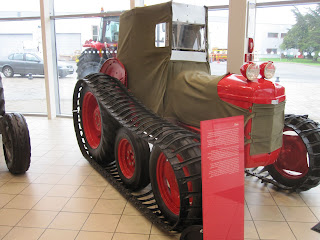 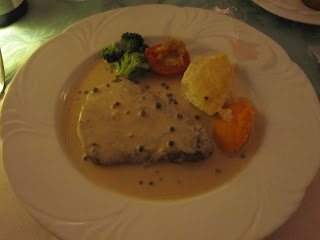 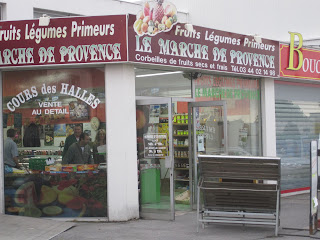 It figures the day I am set to leave for two weeks in Europe the US puts a alert up for Americans in Europe. I will be ok. If not, my will is on my blog. Saved, not published.

This place on Buford Highway caught my eye. I finally had time to stop and take a photo. I was in the market for new tires. Of course I was thinking of IFY tires. I can't make this stuff up. 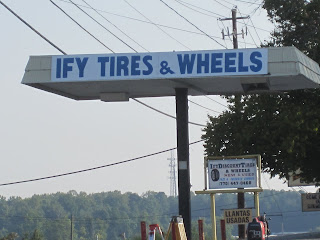