It looks like some folks got creative with tempra paint on the Kilawog Rt 11 ice flows. It gets pretty. I can't wait until we can blast some paint bombs up higher with a potato canon appropriately loaded. Err... I mean until someone comes along with a potato canon with dry paint bombs. Life is too short not to make art where you can. 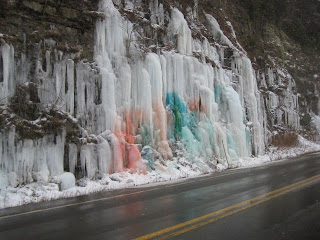 Another story about the dire straits of Upstate NY. http://finance.yahoo.com/family-home/article/111709/us-cities-running-out-of-people. Two out the 7 worst cites are in Upstate NY.

Upstate NY is being drained like a malnourished African tit for downstate pension and entitlement needs. It has never been more apparent. When times are good people can look the other way. What do people do when do when things aren't going well? It is well past the time to have Upstate succeed from the rest of NY. I cannot tell you how often I run into someone from Upstate NY. I was in Paris, France and I ran into someone from Irondequoit. I was on the Appalachian Trail and I ran into someone from Mendon. I was in Kroger in Georgia and met someone from Fairport. Like my boss says (he's from Fredonia) "they have ruined that state". None truer words. Remember the "I Love NY slogan"? Where has that tourism effort gone? Sadly it has been abandoned. Where are the lower (even just reasonable) taxes, fuel prices, or other incentives (favorable legislation duh!) for business? Your answer is as good as mine since none of these economic stimulating conditions exist.

Similar to the the African Country Sudan being split where the north is preventing the sale of the south's oil, NY is in a similar situation. Moratorium after moratorium on gas drilling permits in the Southern-tier (the most depressed part of the state) has gotten to the point of being criminal and has brought levels of regional tensions that the area has never known. I think the word "flashpoint" is a good one. http://www.tri-cityherald.com/2010/12/23/1302325/control-of-sudans-oil-a-big-issue.html

DJ and I went downtown Atlanta for New years eve. We did the "Peach Drop" experience along with 150,000 of our now close friends. The crowd is very well behaved. There is concern for each other in a scene like that even when the mobs are moving as waves with distributed pressures. We are all connected. The MARTA trains really behave differently when they are jammed with thousands of riders. http://www.tripsmarter.com/travelinfo/atlanta/events/new-years-eve-peach-drop. 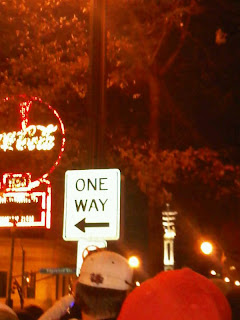 The PBS NOVA program tonight was about Antarctica. It was strange watching it. All the shots brought back feelings, everything from the thin blue glove liners and "Big Red" (the parkas). The very familiar helicopters 08H and 36J were stories in themselves to me. I saw several of my friends and it seems like I had met just about everyone who was interviewed. A fair amount of the shooting was done when I was there it appeared. It was interesting to get whisked about by camera edits rather than geography, a shot of Mt Erebus and then in the same sequence you are at WAIS Divide or some place out in the Taylor Valley. For the viewer it was all one place, Antarctica.

It was nice and made me homesick in a way.

I am headed back to Atlanta after being in NY for the holidays. I am delayed in the SYR airport for at least a few hours because of weather in Atlanta. I have not had many delays traveling, really. Maybe I just don't notice them as much any more.

The trees were frosted on some of the hilltops around Dryden NY. It makes things look cold. 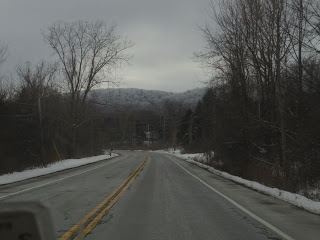