I have received questions about the catastrophe in Atlanta over that last few days from all over the world. First of all, I think that the world has a lot bigger issues. There have been no deaths (that I heard about in ATL) regarding the weather and traffic. This is much better than a normal day in ATL when everything is going good! Lots of folks die on the roads here and all across the US on a so-called "good day".

I was largely unaffected by the recent events. My commute was studied before I bought my house here in Duluth. It is about 4 miles (about 2 miles as the bird flies) from my work and I cross no rivers or other extreme constraints except for the railroad tracks. I left work on Tuesday at 5:00 PM and I made it home in about 10 minutes. I am a bit sensitive about getting stranded on highways and generally any sort of delays on the road. I was stranded (and subsequently lost) on the NY state Thruway as part of my commute in the 90s for about 16 hours. There were many hours to write and think. The folks that were stranded in ATL need to focus on their terrible commutes they deal with every day. I routinely hear about folks getting stuck in traffic for 4 hours in ATL.

Thursday Morning I headed out at a normal time (before reading my emails) before 7:00. There were zero cars at work, checking my emails I see work is closed, I then headed off for my eye doctors, -not open, no calls-. It was pretty weird driving around with no issues at all this morning. I had to find a patch of ice to look to take this pic.

ATL does not have weather problems. We have traffic problems. The problems will not be solved by more linear expansion of pavement and traffic lights. More lanes, more signs, more paint, more of the standard stuff in the past will not solve the problems. Some things just plain do not scale. It needs to be fixed with electronic systems in each and every car. In this day and age, you would think that we would get these solutions "to the pavement" so to speak. In the age of GPS, micro OS's and pervasive UHF/VHF radio we would not have these issues. It is time to fix it. ATL is the place. 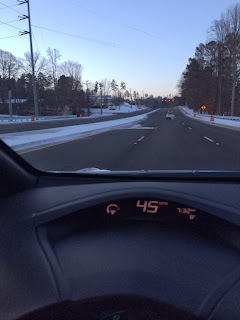 Let it snow! We have snow in Atlanta. There was an inch on my car after work. I am cool with it although running all the defroster items in my all electric car "the fishcar" reduced my overall charge by about 10% compared to otherwise no snow conditions. It was a bit weird scraping my car without an engine running and of course, no snow brush or scrapers. I guess that is why these situations breed Yankee ingenuity. For my ancestors it meant family survival. I think that is a strong motivator to do things differently. 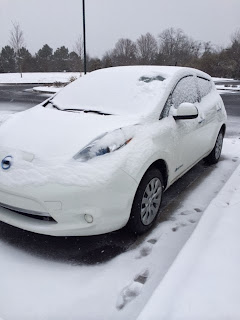 We have been having a cold winter in Atlanta. Some days it has been as cold or colder than Moscow or Finland. They laugh at me when I show up at work with my parka and fur hat. Cold is cold. Dress for it.

It has been so cold my lake has frozen. First time I have seen this, nothing close last year. It didn't totally freeze or anything, but it set up more like a Frozen Daiquiri or something. My truck has finally made it into the shop. I am getting the body work done, fixing the rust from up north. That has to be the single most thing I like about things down here in GA compared to NY. It's not the weather, really. I can dress for the weather and there is beauty in the cold and snow. The cars don't rust. My Brother calls it the "Tin Worms". The government isn't splashing corrosive material on my assets. 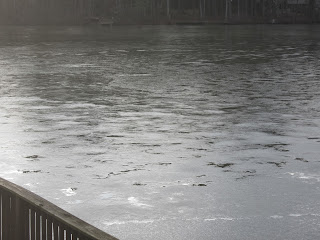