Interesting plant. Some years ago I found myself in Charles DeGaulle Airport in Paris around Midnight waiting for Angie to arrive. I was unable to buy any flowers in my travels during the day and it was too late at the airport. The airport shops were all closed. Hmmm.. what to do? In pacing around the airport I found some large potted plants and I snipped a small cutting from one. I presented the cutting (flower) to Angie when she arrived. (BTW, I did end up getting some nice flowers in Rouen the next day.) The cutting made its way to Moscow after we had parted ways. Given to her Friend Anna, it was rooted, transplanted and is doing quite well in Moscow. I like the picture. It shows the cutting all grown up with a Soviet style building in the background. 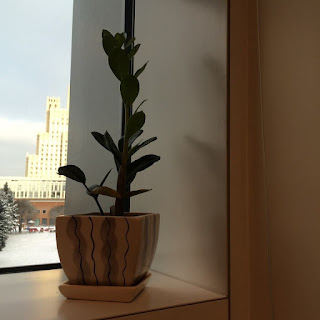