Angie and I went to a rock concert Tuesday night at the Fonda Theater on Hollywood Blvd in LA. I hate traffic, so we took the Metrolink train to Union station in LA (we ate our dinner on the train) then 10 metro stops to Hollywood/Vine. It took about about an hour an 45 minutes.

It was a Мумий Тролль (Mumiy Troll) concert. He is from Angie's home city - a 9 hour flight from Moscow (Vladivostock). He is very popular in Russia. He has a unique whimsical style that is a cross between Russian folk Balalaika, and David Bowie. He uses decent poetry placed on top of simple -sometimes mocking melodies for popular effect.

He has been called "Russias biggest rock band, Mumiy Troll began as one of the most socially dangerous bands in the world as noted by a local Communist party chief in the former Soviet Union; yet, was hailed as Best Band of the Millennium by leading Russian music critics after the fall of communism. Mumiy Troll are the most influential and successful independent artists in Russia today. Part of Mumiy Troll's success can be attributed to their multi-genre sound, a hybrid of rock and pop which songwriter Lagutenko calls "rockapops". The Los Angeles Times has described the band "a nuclear meltdown of The Bravery, Tom Petty and The Afghan Whigs."

Angie interprets the poetry for me. 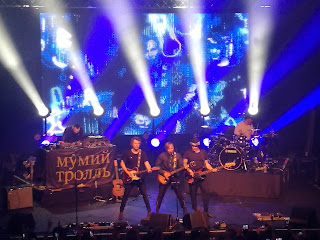