Spring has sprung in Duluth. The birds are singing, the buds are budding. Time to spend time working on the house.

The following pic shows one of the roots of the traffic problem in Atlanta. There was a minor fender bender on I-285 yesterday. They dragged and drove the cars involved to the side of the road in a few minutes after "the authorities" got to the scene, After that though they had all the lanes blocked for god-only-knows-why afterwards. At least before the authorities got to the scene folks could use 3 of the five lanes. Man made disruptions. Traffic backs up for miles and miles and lanes and lanes. lets say a car takes 22 feet (given the space between them). If traffic is backed up for one miles in five lanes that works out to be 1200 cars, and that is if it is only backed up for one mile. A 5 mile backup is common. 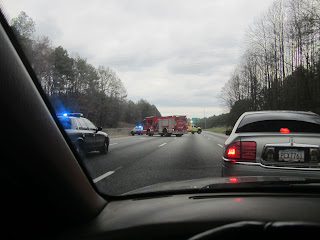